Listen to Gogowé’s ‘Wanna Be Somebody’ and ‘Bode’

Following on from her latest single ‘Funmilayo’ in collaboration with Complex, The FADER, and V Magazine supported artist and producer AYLØ, which has garnered nearly 100,000 streams, DC-based Nigerian afrofusion artist and instrumentalist GOGOWÉ is excited to kickstart 2020 with two brand new tracks titled ‘WANNA BE SOMEBODY’ and ‘BODÉ’, to serve as the double a-side lead singles for her forthcoming debut EP Je M’apelle Gogowé, which is due for release later this year.

Both written by Gogowé, ‘Wanna Be Somebody’ is an infectious highlife fusion offering, which sees Gogowé open up about the battle to pursue your calling boldly. According to her, the song is “about fulfilling your purpose, and I hope you can feel that energy and light when listening to the song. We live in a time where it’s easy to lose focus of your individual calling and almost always comparing yourself to others. This song is inspired by just that. I want to lend my little voice towards contributing something positive to the world, and in this case, it is pursuing your purpose unapologetically”.

The vulnerable ‘Bodé’ on the other hand is an afrosoul masterpiece, led by Gogowé’s lush vocals, delicate harmonies and heartbreaking lyrics. As she explains, “I hate to admit it but ‘Bode’ was inspired by that dark place you find yourself after a relationship ends, hence the minor chords and progressions in the song. What I love about it though, is that it is still very uplifting and soulful, and it does not leave you in a dark place when you listen. I am very proud of what I was able to do with this song sonically, especially still keeping that afro element that I always strive to bring to every song I make”.

Drawing influences from the greats such as Afrobeat creator and pioneer Fela Anikulapo-Kuti, the late great Reggae legend Bob Marley, and one of the greatest performers of all time Beyoncé, Gogowé makes bold and daring music that is fuelled by her honest and transparent take on life, culture and social issues, with an eccentric, exciting and emotive musical style that can best be described as a genre-fluid melting pot of afrofusion, afrobeat, highlife and soul.

STREAM ‘WANNA BE SOMEBODY’ HERE: https://open.spotify.com/track/7adCOcxjAXvXz1v8qvDjKH 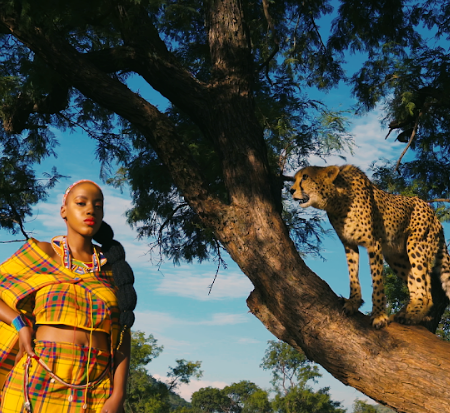