Not3s & Maleek Berry Black, Bold And Lit In ‘Sit Back Down’ Music Video

20-year-old London based MC, Not3s dishes out the visuals for his hit single ‘Sit Back Down’ featuring Maleek Berry. ‘Sit Back Down’ is a combination of afropop, dancehall, hip-hop and R&B.

The Hip-hop recording artist has turned heads with hit songs like “Addison Lee” and “Uber” since its release in November 2016, the song has been slowly racking up millions of plays on YouTube, and dominating Instagram Stories.

The east London native explained that the 3 in his name represents the things he wants the most, “money notes, music notes, and people taking note of me.” 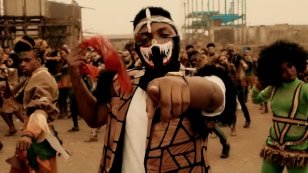