Super talented Kenyan singer, producer and multi-instrumentalist Blinky Bill has released “Mungu Halali”—new single and music video, off his highly rated self-produced 2018 international debut album Everyone is Winging it and Other Fly Tales. The gospel themed “Mungu Halali” is the perfect soul lifter and a declaration of gratitude. Blinky says, “If you’re going through a hard time or have been over the past, this is your song of encouragement. I felt like I wanted to do something like that.”

From the cool soulful fuse of groove, jazz and funk to marshaling Sage, Sara Mitaru, Wambura Mitaru and Lisa Oduor Noah—his friends in music and Kenya’s top power vocalists; this is Blinky at his best.

With scenes switching between the streets to Blinky’s normal chill zone, always surrounded by vinyl records; the music video shot by Mbithi captures the heart and soul of Nairobi’s diversity—from religion, family, hustle to legend and more. Leonard Mambo Mbotela, the legendary Kenyan veteran media guru, of the ‘Je huu ni ungwana?’ popular old school show opens the video, with Mbithi and Dan Muli of Just A Band—Blinky’s former electronic and funk band, closing off in a nostalgic twist. The video also features Blinky’s parents and an artsy lot of Nairobians like Patricia Kihoro, Lyra Aoko and Wanja Wohoro.
On producing “Mungu Halali”, Blinky describes his soulful collaborators as “Some of the best singers in Kenya,” adding, “I wanted to get the contrast between the song’s up tempo, my voice and their voices, and they came through.” The masterpiece follows the success of Blinky’s new album releases: “No Touch Am” featuring Nneka, “Don’t Worry” and “Showdown” featuring MVROE and Kiwango. 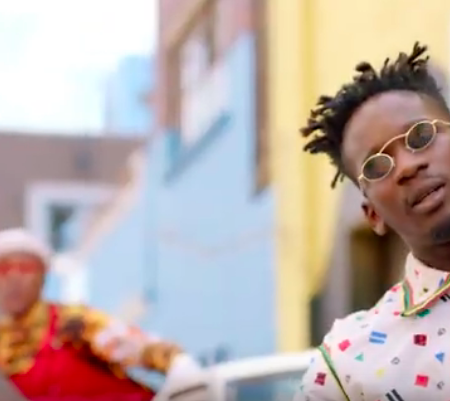 Next post Listen: King Mola makes a return with 'Keep On'