Recall that singer #DammyKrane was arrested alongside Ilochukwu, who is said to be a promoter in the US. 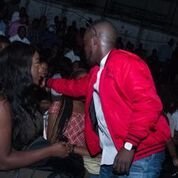 #MIAbaga is giving his two cents on the situation:


‘The promoters out there are trying their best, the artistes too are trying, we can’t really speak about anything until we hear the end of the case……I know Dammy Krane personally, I don’t think he had anything to do with this.’