After Nicki announced the news, the rapper shared a screenshot of one of Nicki’s shoes that she wore in the video for Ciara’s I’m Out track.

The track itself was a break up anthem for women leaving their men in 2013.

He simply captioned the post: “If you walk out don’t wear these they wack…..”

Many commenters couldn’t believe the levels of pettiness that Meek Mill was going to and he quickly deleted the post.

Was he in fear of Nicki’s wrath? Or her fiercely loyal Barbz? Either way, the post didn’t stick around for long. 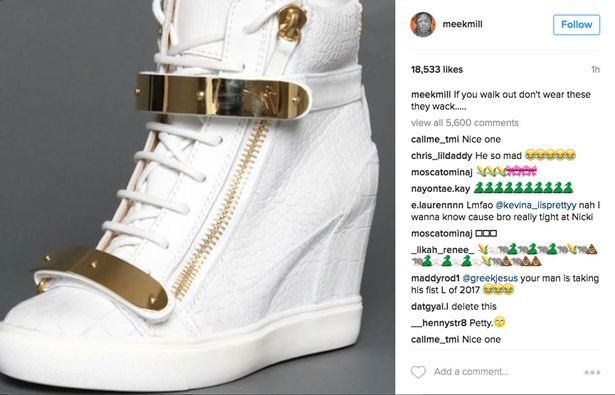 The Anaconda star called time on her relationship with the rapper and has decided to fly solo and focus all of her energy on her music, which she has teased will be out “really soon”.

Taking to Twitter to address the rumours, she wrote: “To confirm, yes I am single. Focusing on my work and looking forward to sharing it with you guys really soon.