You say what?!
King Sunny Ade would be performing at the Coachella music festival in the US. Beyonce, Kendrick Lamar headlining the event 🙌 pic.twitter.com/qqDOcqbnjX

Just after news broke that Queen Bey and Kendrick Lamar will be headlining Coachella 2017 alongside Radiohead, we found out that the juju legend, King Sunny Adé, will be performing as well at Valley Music and Arts Festival, taking place in Indio, Calif. over the course of two weekends in April.

Confirmed today (Jan. 3), this year’s event is slated to feature another star-studded roster of artists for what’s sure to be one of 2017’s most talked-about events. 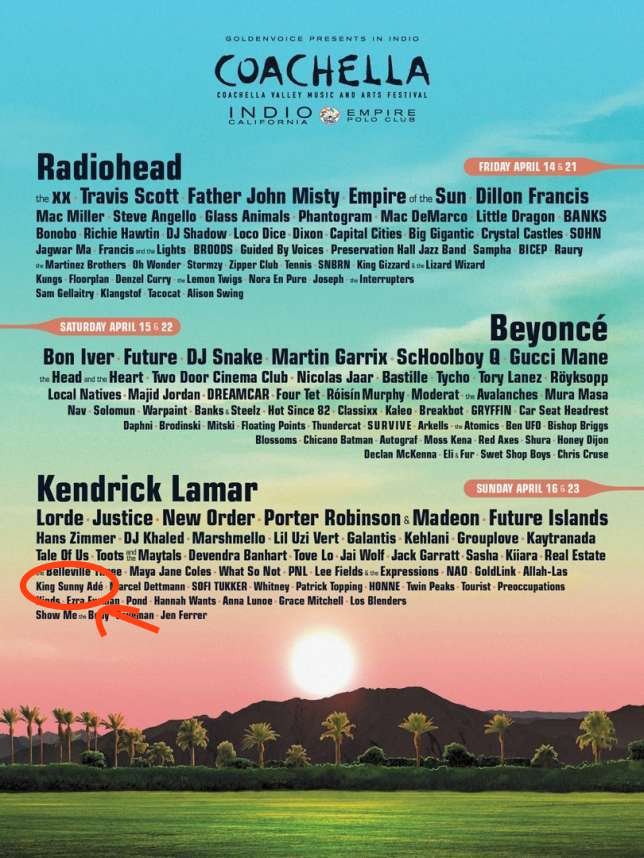 Opening things up on Friday (Apr. 14), the date will include sets from Travis Scott, Mac Miller, DJ Shadow, and more, as Radiohead will rock the night away as the first evening’s headliners.

Things will get royal on Saturday (Apr. 15) when Queen Bey graces the stage. Prior to Beyoncé’s arrival, fans will be treated to sets by Future, DJ Snake, ScHoolboy Q, Gucci Mane, Tory Lanez, and Majid Jordan, among others.

Late last year, the juju legend’s guitar was auctioned off – at his 70th birthday and 50th anniversary on stage – for an impressive ₦52.1 million and now he’ll be performing at one of the most famous annual music and arts festivals. Can someone please introduce us to his PR and management team, cause they are doing a damn good job!