Wo’ crooner Olamide had a successful fourth edition of his concert tagged Olamide Live in Lagos: The Concert.

Organized by YBNL, Red & Axla, Heat, Pentagon and Powered by the Lagos State Government, this year’s edition was held at the Teslim Balogun Stadium Surulere, Lagos on the 17th December, 2017.

Olamide Live in Lagos: The Concert definitely brought Lagos to a halt with the release of his new album titled ‘Lagos NaWa’.

A fan with the twitter handle @Folushaw was present at the event and gave an insight on all he experience at the show.

Okay!!! Lemme do a small thread about my experience at #OLIC4 , today. pic.twitter.com/FBmgl6YXqr

I was particularly impressed by the number of security personnel on ground.

I was overwhelmed with joy that Nigerians paid N1,000 & got a variety of free food & drinks.@olamide_YBNL God has blessed you! pic.twitter.com/r0Lwaz6RoM

If no be you then tell me who ooh?

Nobody messing with ma boo ooh

And @TiwaSavage gave them the famous #SaySayMaley dance and the crowd went wild….🔥🔥🔥

Ajebutter Babygirl on a Wobey Level.🙌🙌🙌

When u hear street ti take over, its not a joke ting.#OLIC4#LagosNawa#WobeySound pic.twitter.com/k42NYIq9V9

Olamide went back to that career changing album.

I saw a few commissioners and heads of agencies in Lagos.

I also noticed there were plain clothed policemen & spies among the large crowd.

And Lawma had their staff on ground cleaning as the show proceeded.#OLIC4

A fine gentleman bouncer sha helped my laive and said I can pass the opposite side cos I was VIP…KORRECT!

After small jogging, I reached the field.

I kack for one side, then called my guys them.

As I said at the beginning of this thread.

EVERYBODY should CLAP for @olamide_YBNL and his team.

My #OLIC4 experience was amazing.

Formerly Star Boy entertainment singer, Rasheed aka LAX was pictured as he performs in his NYSC uniform at the Olamide Live In Concert OLIC4 in Lagos. 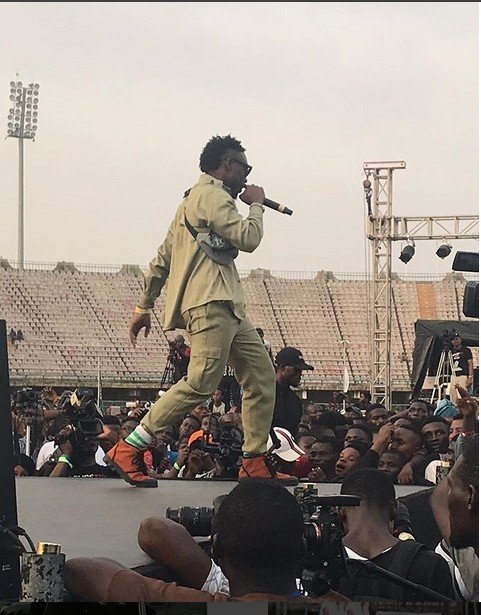 Olamide was also criticized by Nigerians for inviting Lagos state assistant commissioner of police Yomi Shogunle to perform at OLIC 4.

Olamide came under attack for lack of sensitivity by inviting the ACP, known as Yomi SARS who was videoed bragging about the activities of SARS.

While some Nigerians expressed disappointed at Olamide for bringing someone who reportedly humiliated youths, others have called for the show to be boycotted and Yomi SARS humiliated.

Here are some controversial comments:

@officialdaddymo “So Olamide is giving Yomi SARS a platform to perform at OLIC 4.It’s one thing to be ignorant & not understand consequences of your actions. It’s another thing to be aware of it but completely detached from the reality that’s going on around you.

@ani_nomso “How on earth do you bring Yomi Sars to Perform for the same Youths that he & his Colleagues Brutalise & humiliate? No Respect for the Youths from Olamide after all the #EndSARS tweets. Zero emotional intelligence.