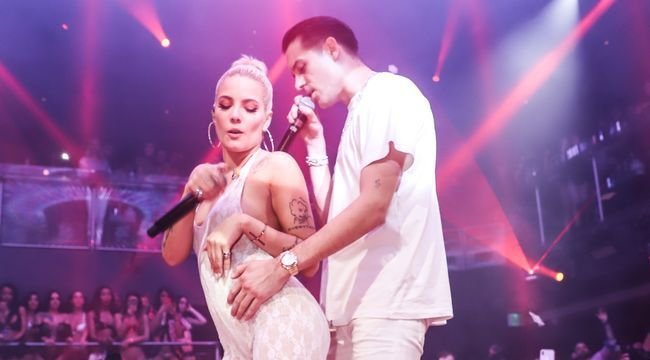 Ashley Nicolette Frangipane or more popularly known as Halsey broke down while she was performing at Common Ground Music Festival, Michigan, her first public appearance after breaking up with beau, G-Eazy. The 23 and 29-years old first sparked dating rumors when they recorded the single Him & I in summer 2017. Even if you are engrossed in Betway Naija, betting on your favorite games, we are sure you wouldn’t want to miss out on this news. The news has come as a shock to many fans, for sure.

Halsey announced their breakup on her Instagram account, in which she wrote that they are taking some time apart and while they do so, she will focus on her career and hopes for the best for G-Eazy. But it seems like the breakup is harder for Halsey than she imagined it. During her performance of Sorry, Halsey started crying while singing – someone will love you / But someone isn’t me. Her fans were curious about their breakup a few weeks before she made the official announcement since she deleted all their photos from her Instagram account.

How Are They Coping Up With the Breakup?

G-Eazy seems to be doing a better job at coping up with the breakup. On the day of announcement, the 29-years old rapper was seen solo at the Paris Fashion Week. On July 7, 2018, he performed at the GMA‘s 2018 Summer Concert Series, held in New York City.

The two American artists were together for a little over a year. After her concert was over, Halsey’s fans rushed to Twitter to support their favorite artist. One of her fans wrote on Twitter that the video absolutely destroys her, but she’ll be there with her throughout. Another wrote that she deserves a better person, while the third one was sad seeing her cry at the concert.

Fourth user wrote that Halsey shouldn’t forget that she’s loved and not alone. On her Instagram story, Halsey said that she normally doesn’t share this kind of personal information but since the issue was public and everyone knew about their relationship, she felt the need to inform her fans.

Everything you need to know about Halsey

Halsey started her singing career in 2014 and released her first album, Badlands, in 2015. She started her career singing covers on YouTube and recently sang a hit song with The Chainsmokers and Justin Bieber.

Before going on her first single tour, she toured with The Weeknd and Imagine Dragons. Halsey is friends with people across television and music industry and her best friends include Jared Leto, Tyler Posey, Ruby Rose, and Matt Healy.

She is an advocate for mental health and has been public about suffering from bipolar disorder and is also openly bisexual. She has made it her life’s mission to stand for herself and her fans. Halsey loves dyeing her hair and has tried every color from green to red. And just like all of us, she loves to fangirl and isn’t afraid of doing so.

“Too worried about sellin’ out shoes,” Drake goes after Kanye | Watch “Behind Barz” freestyle

Watch as Ghanaian rappers Medikal, Ahtitude and Kwesi Arthur flex on “How Much”