Medikal has been the topic around critics referring to the Ghanaian rapper as fraudster following the display of some of the luxurious items he has put on display but it isn’t the rapper that is speaking up now – his mother wants critics to know his son is a very hardworking man.

According to Madam Portia Lamptey, her son is a hardworking man who has other businesses aside doing music, he revealed on a radio interview recently.

“He works so hard for everything he’s enjoying now. Medikal does other business aside music, he’s now an ambassador of a mobile company as well. Fraud is out”, she stated.

She also said she had wanted his son, Medikal to be a medical doctor but passion for rapping had the best of him and revealed he was once expelled from school due to this. 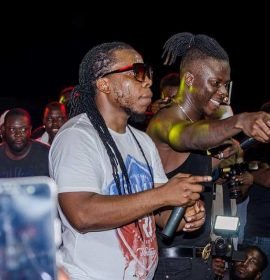