Nigerian YBNL Nation artiste, Adekunle Gold is in Kenya as part of his East African Media Tour. The media tour which began yesterday is set to last until Sunday 5th ,February. During the 5 day period, he will meet and give interviews with various journalists from radio and TV stations, newspapers and magazines. He has already held a number of interviews with Kenya’s notable media houses among them, NTV, K24, HOT 96 and The Star. 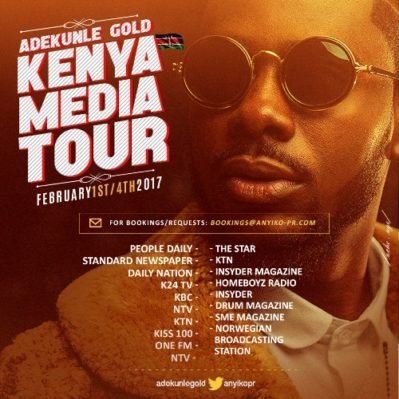 Before proceeding to Tanzania for his East African Tour, Adekunle intends to hit the studio with some of Kenya’s music heavyweights like Sauti Sol, Dela and Antoneosoul. He is also planning to meet and greet friends and fans, as he “hopefully makes more friends in Kenya”, he adds.

Celebrated for his unique style of music – Urban Highlife, the Nigerian music star is one of the fastest rising artistes in the continent. He released his 16-track debut album, GOLD last year that features songs: “Orente”, “Pick Up” and “Ready” which have emerged as some of the leading and successful hit singles. It also made it to #7 on Billboard in the first week of release.

Falz to HuffingtonPost: I prefer performing on the mainland. The people there don’t hold back.