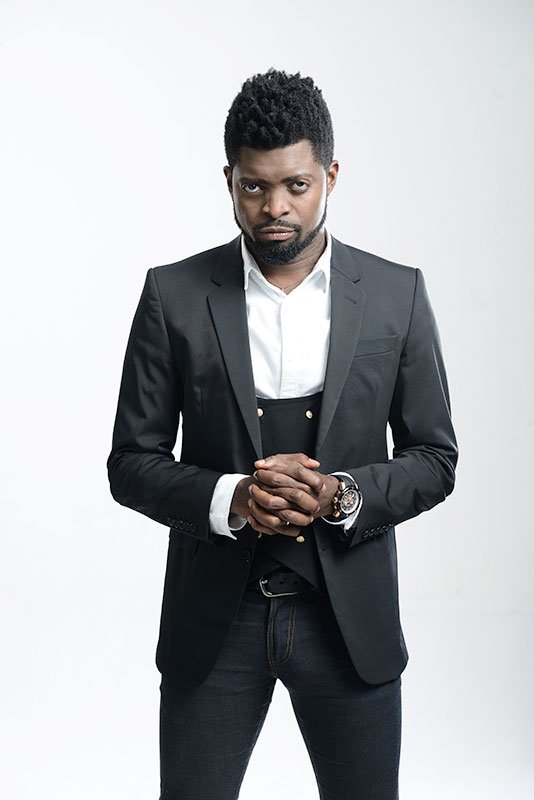 Basketmouth, a leading player in the comedy industry in Nigeria and having represented the Stand-up Comedy genre as one of Nigeria and Africa’s leading exports, the Basketmouth brand has over the years won hearts of Nigerians and non-Nigerians. 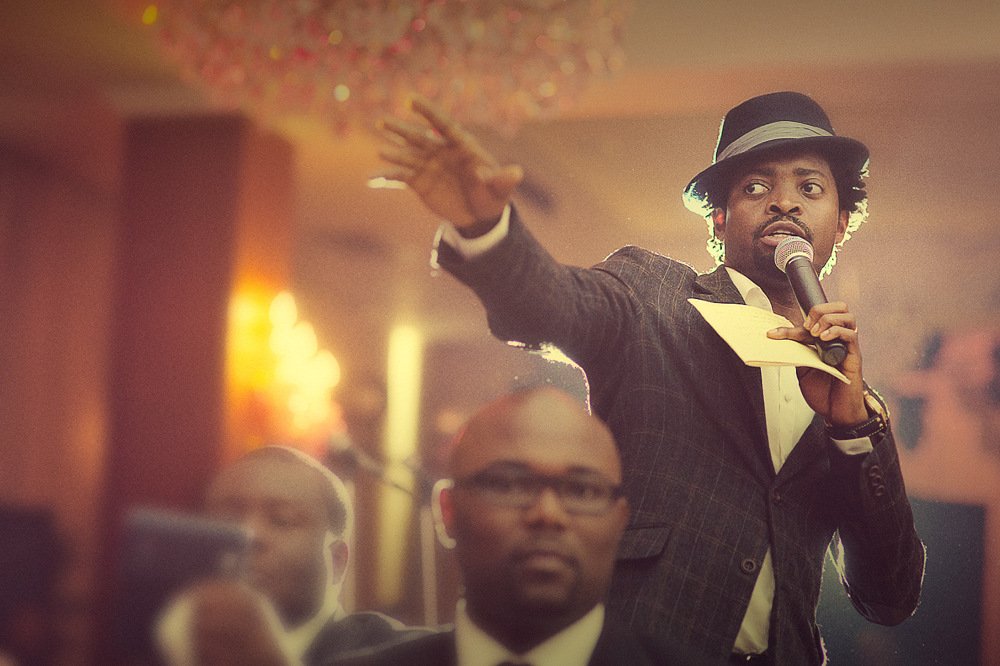 Basket over the years has hosted concerts featuring Jay Z, Rihanna, Beyonce, Joe, Chris Brown, Boys 2 men, Sean Paul, Wyclef Jean, Cool and the gang, Akon, Dru Hill,Buster Rhymes,, Fat Joe, Snoop Dogg, Ciara, Jarule, Brian McKnight and many more. He headlined shows all over Africa, including South Africa, Ghana, Tanzania, Zambia, Kenya, Ethiopia etc, in 2013 he was approached by Comedy Central to his his own special and in 2014 was invited to be a part of Just for Laughs ‘one of the biggest comedy festival in the world.

On this note, we are going to mention 10 times we have seen Basketmouth being Africa’s finest and a Perfect host for #SoundcityMVP2016

1. Basketmouth leaves Malawians in stitches after rib-cracking show
December 5, 2015 – There was full of laughter at Bingu International Conference Centre (BICC) auditorium in Lilongwe, the very first time Basketmouth performed live to his Malawian audience. Report has it that he came on stage at around 8pm, delivered performance beyond people’s expectations, that left a non-stop laughter during the entire one hour performance. 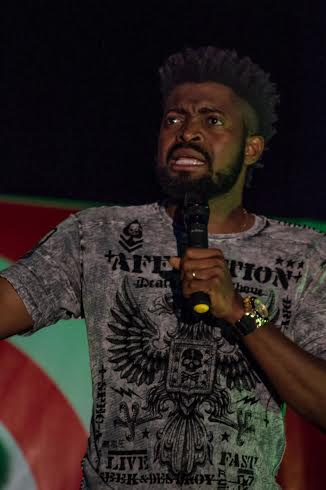 Almost everyone was delighted with his sweet jokes, to say the least, as one comedy fan said had enjoyed the show beyond expectations “I had great time and memorable one” she said

Every July 17 has been declared ‘Basketmouth Day’ in Houston, According to the document below, signed by Annice D. Parker, Mayor of the City of Houston, the highly rated Nigerian comedian got this special recognition on the heels of his contribution in integrating the Nigerian American Community through his art for the past 6 years in the city.
This is huge because 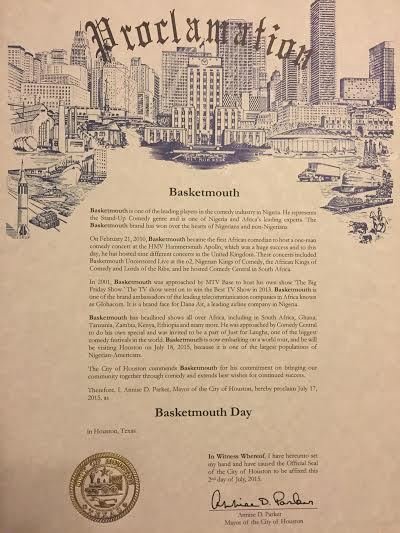 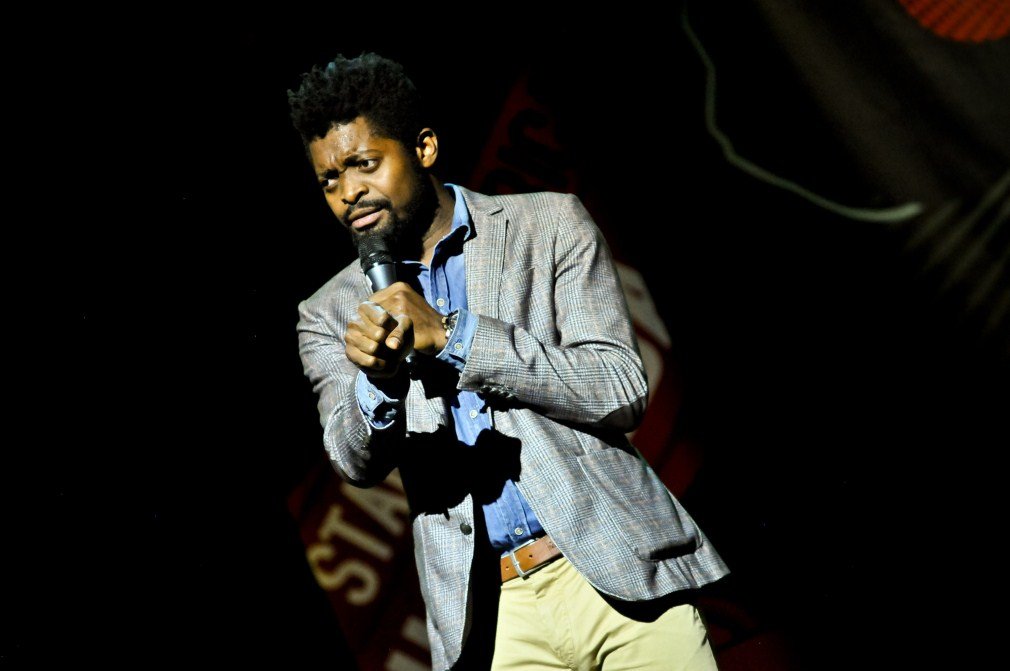 Feb. 21st 2010 – He became the 1st African comedian to host a one man comedy concert at the HMV Hammersmith Apollo, which was a huge success, till date Basketmouth has hosted 9 different concerts in the UK including Basketmouth Uncensored Live @ the o2, Nigerian Kings of Comedy, The African Kings of Comedy, hosted Comedy Central presents in South Africa, Lords of The Ribs, and many more.

4. Alongside World Best Comedians
Basketmouth last year had his debut performance at the famous comedy stores on sunset strip in Los Angeles, where he performed alongside ‘ Tony Baker, Mason Pryo, Malanie Camarcho.

5. Basketmouth Waves the Nigerian Flag High at “Just For Laughs” Fest in Canada 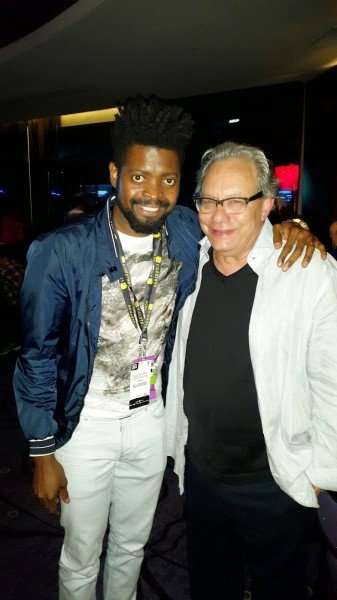 July 2014 – At the ‘Just For Laughs’ festival in Montreal, Canada, Basketmouth had both a memorable and successful experience. The event featured some of the best comedians from all around the world including Lewis Black, Seth Rogen, Aziz Ansari, Russell Peters, Andy Samberg, Jim Gaffigan, Ron White, Hannibal Buress, and Alonzo Budden.
He performed in four shows, all of which he was the only African on the bill. Huge!

Catch Basketmouth at the Soundcity MVP Awards Festival tonight, from 8PM when the live show begins. Guests are advised to come early.