Tanzanian R&B Singer, Jux Is Back With ‘Fimbo’ | Stream

Award winning Tanzanian R&B Singer, Songwriter and performer Jux has released his first official track of 2018 ‘Fimbo’ Produced by Bob Manecky from AM Records and Abbah.

The crooner is back after a 7 month silence since his chart topping last release ‘UTANIUA’. Jux is breaking his silence with this mid tempo feel good ballad and certified radio smash, ‘Fimbo’. This wavy Afro-pop tune has that signature Jux – Bob Manecky touch that has won him a multitude of fans over the years. The word Fimbo is Swahili for ‘Cane or Stick’ in the song he refers to his lover as a Cane/Stick as she’s been somewhat disciplinary and has set him on the right path in life and love.

When speaking about FIMBO Jux said, “I am so happy that my fans will get to hear Fimbo, It’s my first release of 2018 and I have not released anything since August last year so you can tell how excited I am to give them something to jam to”

The visuals to Fimbo were shot in Zanzibar, Tanzania and Directed by Hanscana. 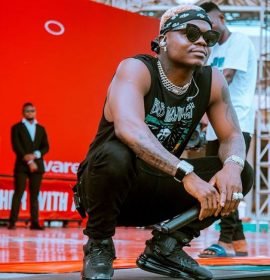