Google announced its biggest New Year’s resolution for 2017: they plan to be powered 100% by renewable energy. This is YUUUUGE! The search engine didn’t make this decision overnight – Google took initiative in small increments before reaching this super environmentally-friendly goal of having no-carbon-footprint. Over the past few years, engineers have worked continuously to make its data centers energy efficient by 50% compared to the industry average.

Google’s first long-term renewable power contract began in 2010 with purchasing 114 megawatts of wind energy from a wind farm in Iowa, and since then, the company has become the largest corporate buyer of renewable energy
in the world. 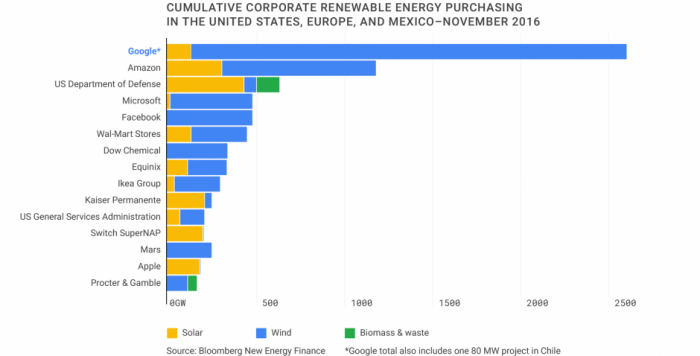 Today, they are purchasing up to 2.6 gigawatts (2,600 megawatts) of wind and solar energy, hoping that it creates awareness for climate change and being more environmentally-friendly.

Since 2010, wind and solar energy have become the lowest cost options for consumers as prices dropped from 60% to 80%. By purchasing renewable energy directly, it has become cost-effective for Google where opportunities to create
new energy from these sources have developed.
Google says that they will only purchase energy
from projects that are funded by them. The
company states:

Being a subsidiary of Alphabet, Google accounts for majority of the energy consumption for Alphabet. Now that a huge part of the company is on renewable energy, expanding sustainability is in the works for the other subsidiaries of Alphabet too.