Boxing champion Amir Khan and his wife Faryal Makhdoom announced their marriage is over in an explosive ongoing row on Twitter, which has seen them both accusing each other of cheating.

“Faryal moved on quick. Always mentioned to me how much she wanted to be with another guy, from all people another boxer @anthonyfjoshua” 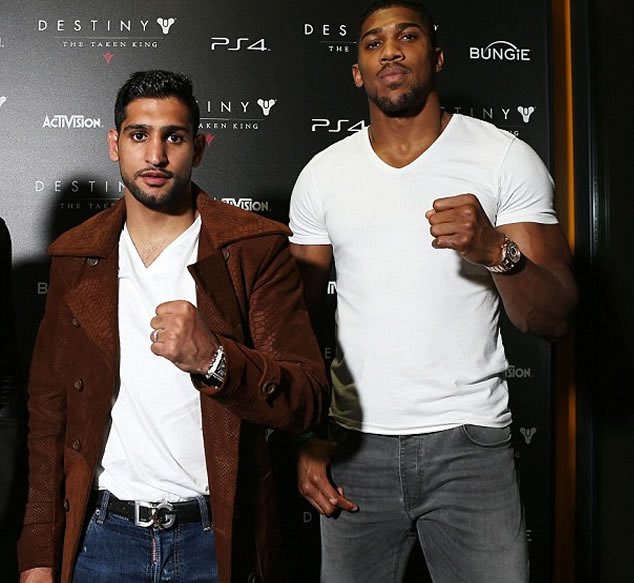 But the 26-year-old model who got married to Khan in 2013, hit back on social media, claiming her husband is lying and that he is a ‘cheater.’

The couple were together on holiday in Dubai to celebrate Faryal’s 26th birthday last week, but it’s understood that Faryal has since flown back to England herself.

“Amir and Faryal have split up. It’s over. There have been problems in the relationship for a long time and they were headed for a separation. It’s the best outcome. She’s a gold-digger.”

In a series of tweets today, Olympic champion Khan, wrote:

“So me and the wife Faryal have agreed to split. I’m currently in Dubai. Wish her all the best.

“Faryal moved on quick. Always mentioned to me how much she wanted to be with another guy, from all people another boxer.

“Lol moved up in the weight classes lol. Trust me I ain’t the jealous type. No need to send me pictures of the men your talking to #disgusted

“Left my family and friends for this Faryal. I’m not hurt but another fighter. I’m making it public. You getting the divorce #Golddigger

“Mans (sic) like Joshua can have my left overs!”

Within minutes, Faryal hit back on her own Twitter account and accused him of cheating on her, MailOnline reports.

“I’m sure you left your family because they robbed you? Not because of me. Stop making false things up.

“Accusing other boxers just because your boxing career is finished. Man up, Amir.

“After all these years. I’ve always defending a cheat, always stuck around for him, always had his back. And I’m called a gold digger?

“LOL! He’s given me jack s**t — I pay house bills and bills for my daughter myself! It’s like I’m a single mother while he’s out messing around. And he has the nerve to blast me like that?

“The amount of evidence I have on you. It can destroy you. But since I loved you at one point in my life. I’ll just let it go.

“I’m not the one who’s been in the papers every month with my pants down. Cheater!

“You have actually lost it. Wtf where do u make this stuff up from? And maybe your boxing career is finished because you’re an adulterer.

“At the end of the day, I can hold my head high knowing I’ve given this marriage my 100% while Amir clearly hasn’t. Bad company.

“Bad role model, always around women , alcohol and then he calls himself a Muslim and runs a charity.

“I’m sorry to all the fans & family hurt by this. But Amir did not need to do stupid tweets accusing others when he’s in the wrong. #guilty

“Sometimes people don’t like it when you give them a taste of their own medicine.”

The news came after the couple ended their bitter six-month public feud with Khan’s family.

Anthony Joshua is yet to speak up.